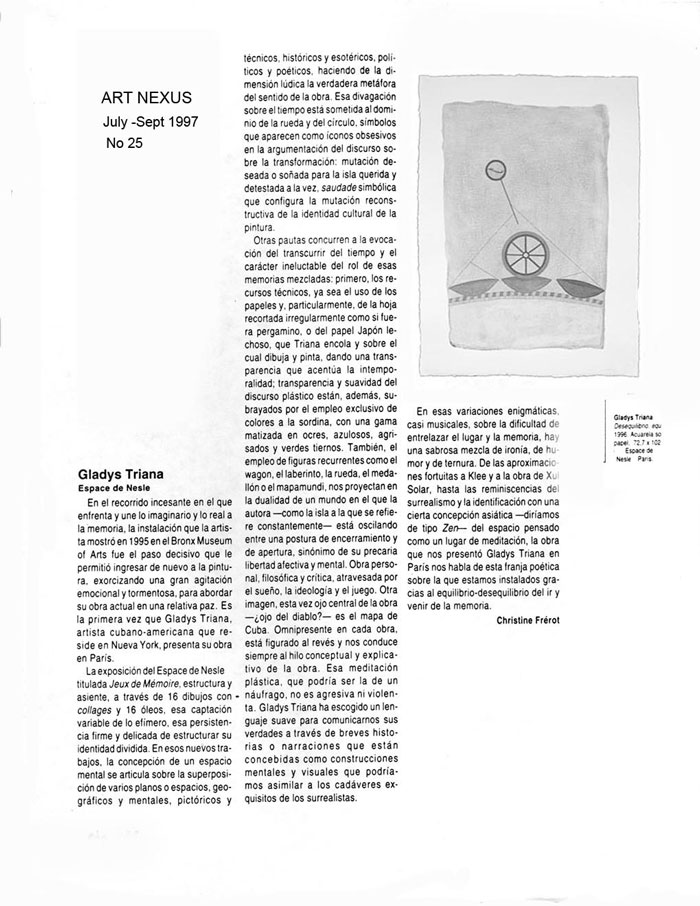 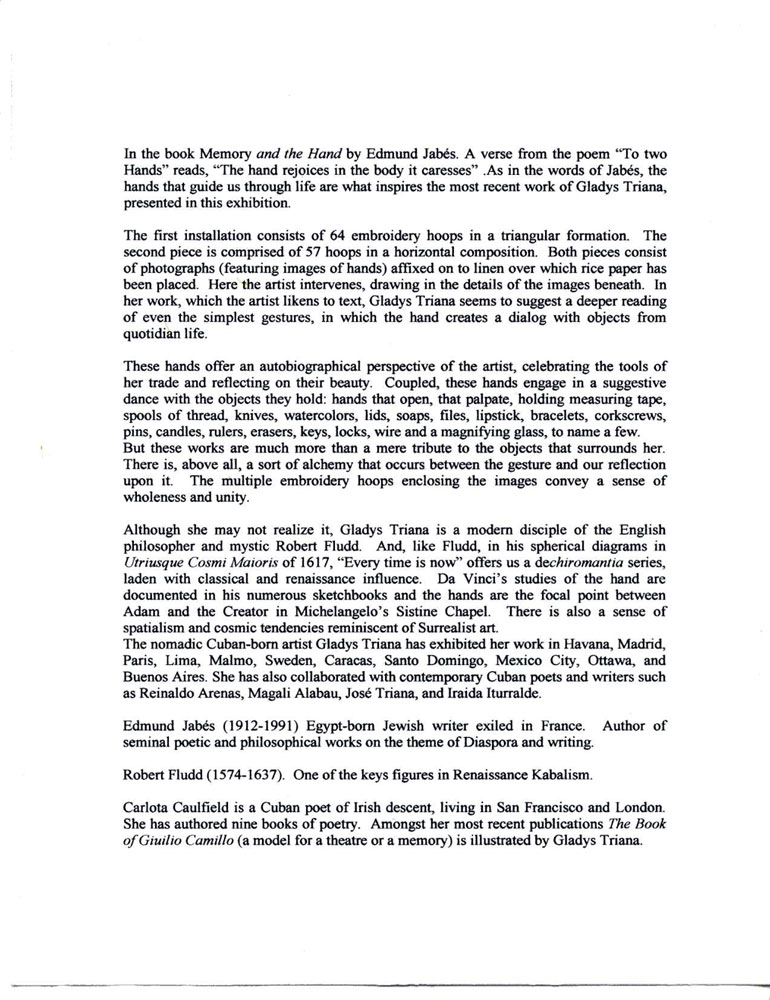 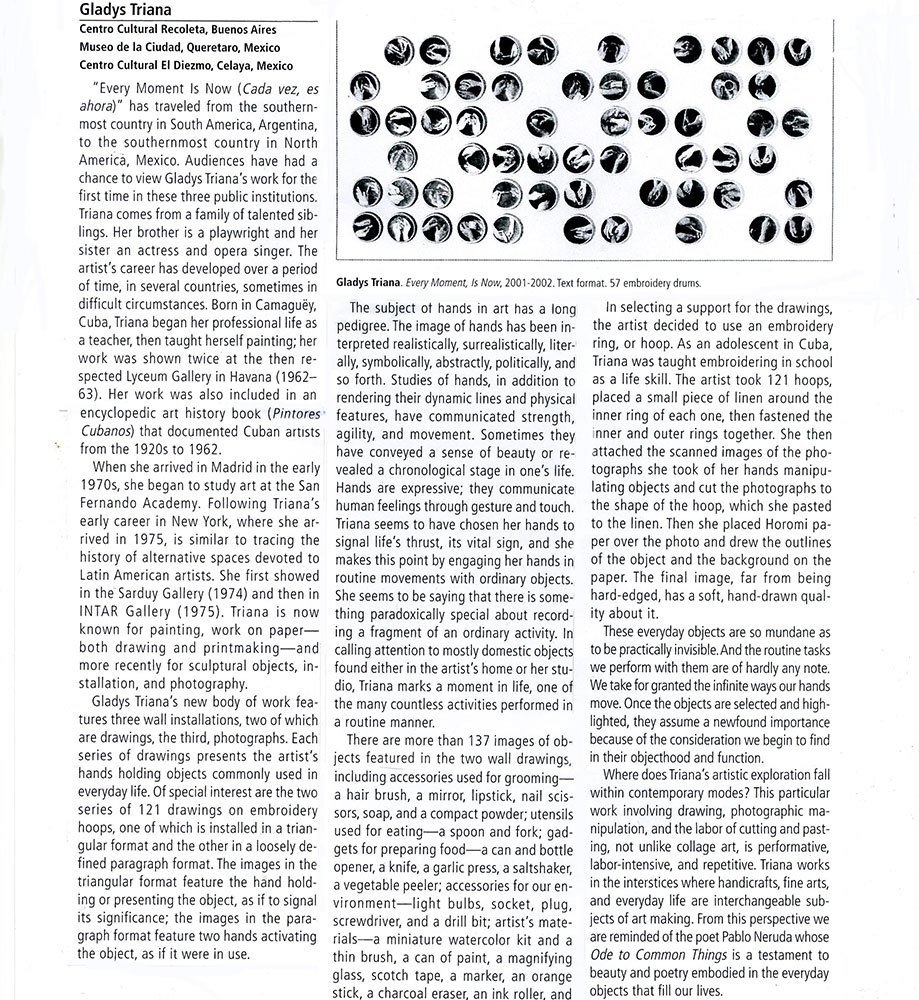 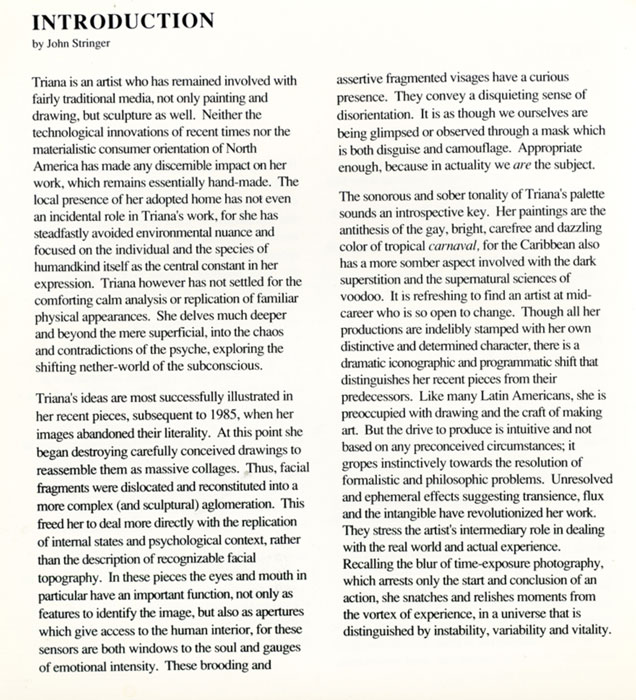 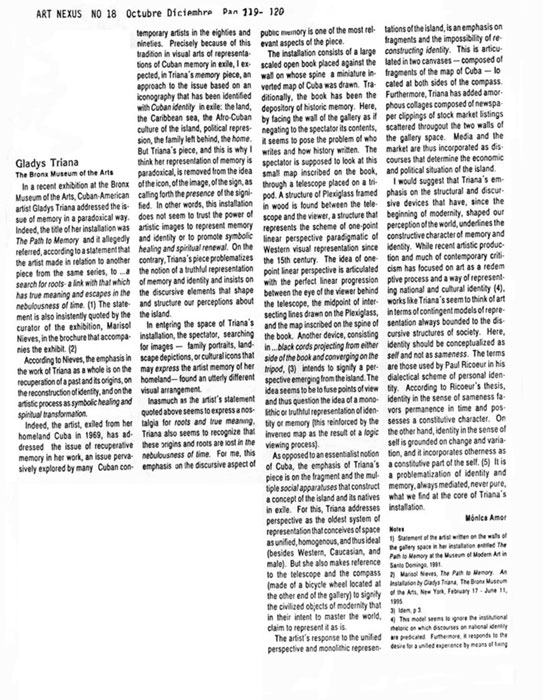 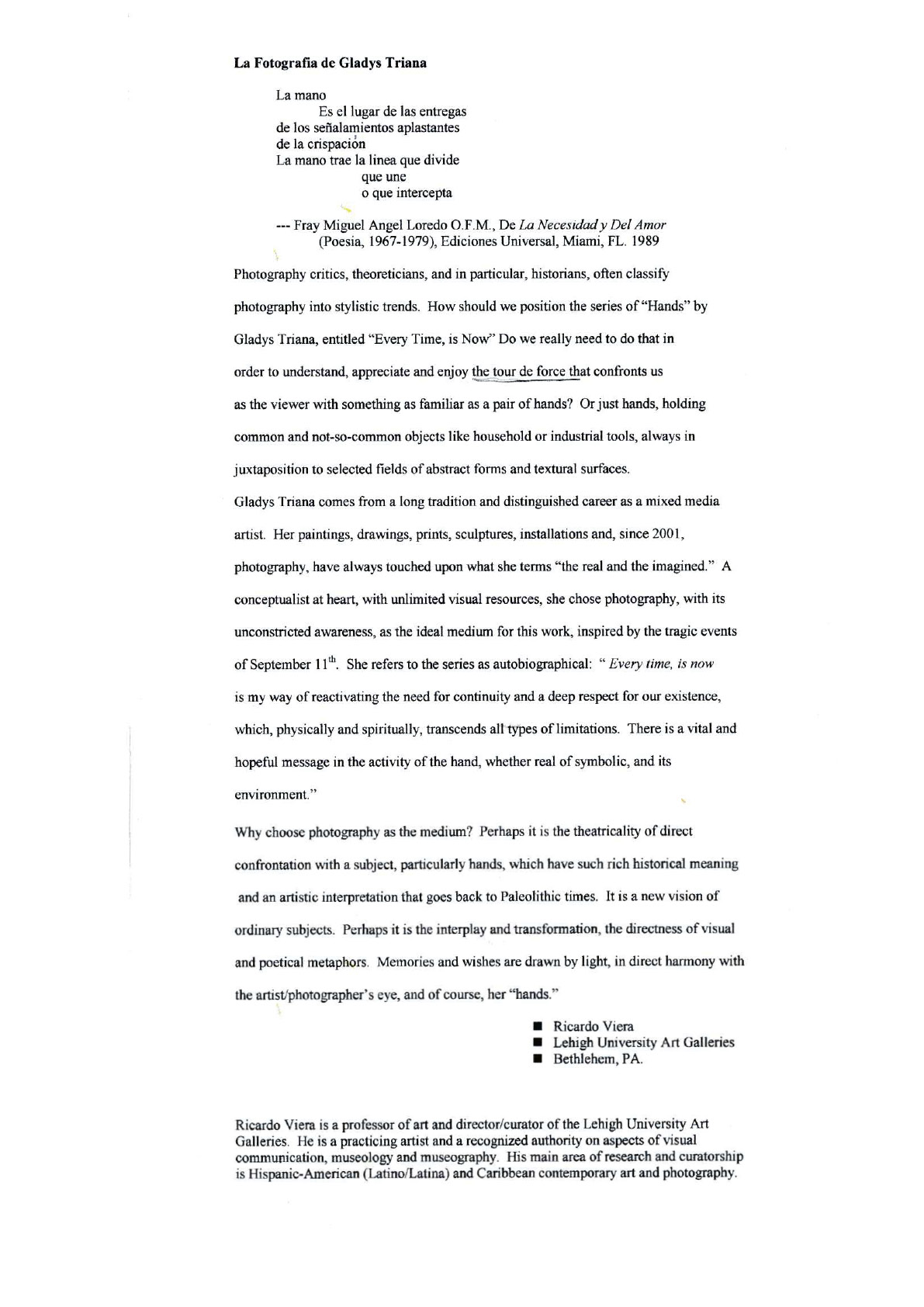 It was during the years 2001-2002 that Gladys Triana made her first photo series. By that time, she had already had a long and successful four-decade career in painting and related arts, such as drawing.

Ech one of the 30 montages of that series, titled Every Time is Now, was a combination of two color photographs: one where her hands held a small personal item –always a different one—, and another taken at some place in the city where she has lived since the 1970s, New York.

This series sparked for Triana a very prolific incursion in pencil drawing during the years 2002-2005. Her installations Paragraph Format, Pyramid Format, Spiral Format and The Game, made during these years, assembled together hundreds of drawings based in the aforementioned pictures, and where her hands established a direct, particular relationship with disparate objects. From the standpoint of her professional trajectory, these works could be understood as a particular moment of fusion of private performance, photography, drawing and installation –plus the discursive potential and the various creation methods inherent to these media— expanding on a universe where all things (whether public or private, everyday or exceptional) are revealed to be simultaneous, converging facets of individual human experience.

In Stillness, an extensive series of 20 photographs made in 2006-2007 where objects forced themselves as the absolute protagonists, steered the artist’s aesthetic towards a new course, and one in which it remains till the present day. After Stillness came The Observer (2008), also made up of 20 photographs; as well as other series in the same medium, but with a lesser amount of images, like The Fog (2008); Line of Fire (2008-2009); On the Field (2009); Seeing or not Seeing (2009); On the Space (2010); Out of Time (2010); and Nature Forces (2011). The aesthetic that supports these photo series also suffused the video The Observer –with cinematography, production and music fragments by James Carman— while expanding at the same time Triana’s possibilities of expression.

The Triana’s subjects or referents are usually small, ambiguous-looking objects, frequently hard to identify except as pieces of a geometric configuration. That is, despite the fact that they show a particular physical shape, these are objects that are being viewed in a highly abstract manner. Sometimes we can identify them as isolated chess pieces or nails from your regular hardware store; however, they never act or function in the predetermined way these objects would –thus altering our perception of them.

If we observe these photographs carefully, we may conclude that these objects are very small, but we can hardly be certain due to the paucity of information these images give us. There is, moreover, something very sculpture-like about them–or, rather, they are postulated as sculpture pieces. Triana sets the stage for these sculpture pieces among which she establishes a relationship scenario; or perhaps, more precisely, a suggestion of a relationship scenario.

It follows that the artist’s strategy has been to shun the function traditionally assigned to photography as a medium for documenting objects or events straight from reality, but taking advantage at the same time of the rhetorical resources of direct visualization proportioned by photography. At the same time, she denies her subject –those everyday objects transubstantiated into sculpture pieces—the possibility of spatial tridimensionality, allowing them only the illusion of tridimensional volume captured in the two-dimensional image. This fact defines both the separation and the crosspollination of photograph and sculpture in Triana’s work.

Without a doubt, the way Gladys Triana uses light in her images plays an essential role in this separation/crosspollination between photography and sculpture that we mentioned above. She explains her use of light contrasts –highly illuminated areas against blocks of dense shadow—by her lifelong passion for the paintings of two masters of European Baroque art: Rembrandt and Caravaggio, who confers volumetric quality to some human figures and objects in their paintings. It is worth mentioning that this exploration of light as a resource for bestowing a sculpture-like quality on an element in a two-dimensional plane can easily bring to mind the concept of the gallery as a space that generates artistic ideology.

Given these characteristics, Triana’s photographs can be conceived as a place of confluence of these aesthetic contributions in regard to light. Using, to the maximum degree of intensification, a resource that plays such a powerful role in photography –which was even known, in its beginnings, as “a drawing made with light”—the artist emphasizes the sculptural quality of the objects/referents that are her subject.

The shape of the Triana’s objects playing the part of subject/referent in each photographed scene, their number, their spatial relationship, and the precise way in which they are lit, makes each image into the staging of a sort of mini-drama, a mere suggestion of a scenario.

Confronted with such a body of work, one can wonder about the reasons for the insistence of a certain area of contemporary art photography —and we could add video to the equation— in exploring scenarios and situations of an absolutely fictional nature. Especially, one would say, given that the aforementioned media carry with them a pretty exclusive documental ambition (in theory as well as in practice), since they were born and have grown to the present day with a strong vocation for dealing, more or less directly, with factual reality.

I suspect it is this same vocation what makes so tempting to use those media to obliterate all identifiable references to the everyday elements of immediate reality. Thanks to being technically created for documental use, they can reproduce to various degrees the mental constructs of fiction and abstraction while at the same time providing an illusion of reality –which subverts the ideas of transparence and identity apparently inherent in the technographic image of the world.

This becomes self-evident in Gladys Triana’s work, in a discourse that tends to appear cryptic, obscure, ambiguous, and, not infrequently, disquieting –even disturbing. The titles of her photo series, for instance, go only as far as to help us find a fissure through which we can steal a look in our attempt to decode the transitory, fleeting and evanescent readings that the images allow us to make. As if they were but an allusion to a whole dramaturgy of mental and emotional states.

It is in the video The Observer (2010) where the aesthetic described above achieves its zenith in the sequence of hermetic “tableaus” shown as well as the splendidly allusive soundtrack accompanying them. Furthermore, it is in this video that the receptive experience of the viewer reaches a definitely disturbing quality. The Observer takes us in a journey through the tropisms of a complex, unstable, and rather intuited relationship between the viewer and the viewed. A relationship that, perhaps, could work as a metaphor of the estrangement and the implications evoked by a viewing of Triana’s photo works as a whole.

José Antonio Navarrete is an art critic and curator based in Miami.