American artist Mark Grotjahn had an impressive and extensive exhibition at Gagosian in Chelsea.

Mark Grotjahn combines gesture and geometry with abstraction and figuration in visually dynamic paintings, sculptures, and works on paper. Each of his series reflects a range of art-historical influences and unfolds in almost obsessive permutations.

Because I have an active and obsessive eye‚ I’m interested in finding as much contentment as I possibly can. In my work I create problems and then solve them in order to feel peace.
—Mark Grotjahn

Grotjahn was born in Pasadena, California. In his paintings, drawings, and sculptures, Grotjahn interweaves and revitalizes various historical modes of abstraction, probing the limits between gesture and geometry, impulse and exactitude. His works unfold according to precise yet mutating rubrics, resulting in an expansive vocabulary of visual motifs that migrate from one series to the next in compulsive, self-referential permutations. Like sedimentary cross sections or horizonless landscapes, the Capri series contrast the allover quality of Abstract Expressionism with moments of controlled, almost minimalist, logic.

Grotjahn began New Capri in 2016, inspired by the legendary home of writer Curzio Malaparte perched on a cliff in Capri. Painted on cardboard and framed behind glass, the New Capri works appear as small, jewellike objects, echoing the geological and botanical patterns of the Mediterranean setting (itself framed by the house’s windows). Seeking to abandon the representational qualities of his Face paintings (2003–)—in which almond-shaped eyes form focal points within kaleidoscopic abstractions—Grotjahn zoomed in on their multicolored arcs, then explored variations of certain sections on a larger, more enveloping scale. Thus, in the Capri works (2016–), painted on canvas, he alternates between vertical and horizontal structures, obfuscating any remnants of the Face paintings by making use of the infinite mutability of paint itself: spreading it; creating rolls, balls, and splatters; writing his name and various dates. The Capri paintings challenge the viewer to determine the chronology of Grotjahn’s marks and strokes, which are raised from the picture plane like impenetrable, thorny brush, trapping the gaze in their puzzling matrices. In the red, black, and white Star Capri paintings (2017–), the tips of the almond-shapes from the Faces form rhythmic geometries, like graphic stars or flowers.In Free Capri (2018–), the last of the three series, Grotjahn seems to have fully abandoned the Faces. Many of the canvases feature parallel rows of “slugs,” grids of squirming tally marks, which accumulate on Grotjahn’s palette knife as he smears into the dense impasto while it is still wet. Literally pulling the background into the foreground, Grotjahn attaches the slugs to the surface of the painting by tracing a thin line through them, reuniting the painted surface with its own waste products. Tapering at either end, the slugs seem alive, wriggling their way into the compositions and picking up streaks of color along the way. 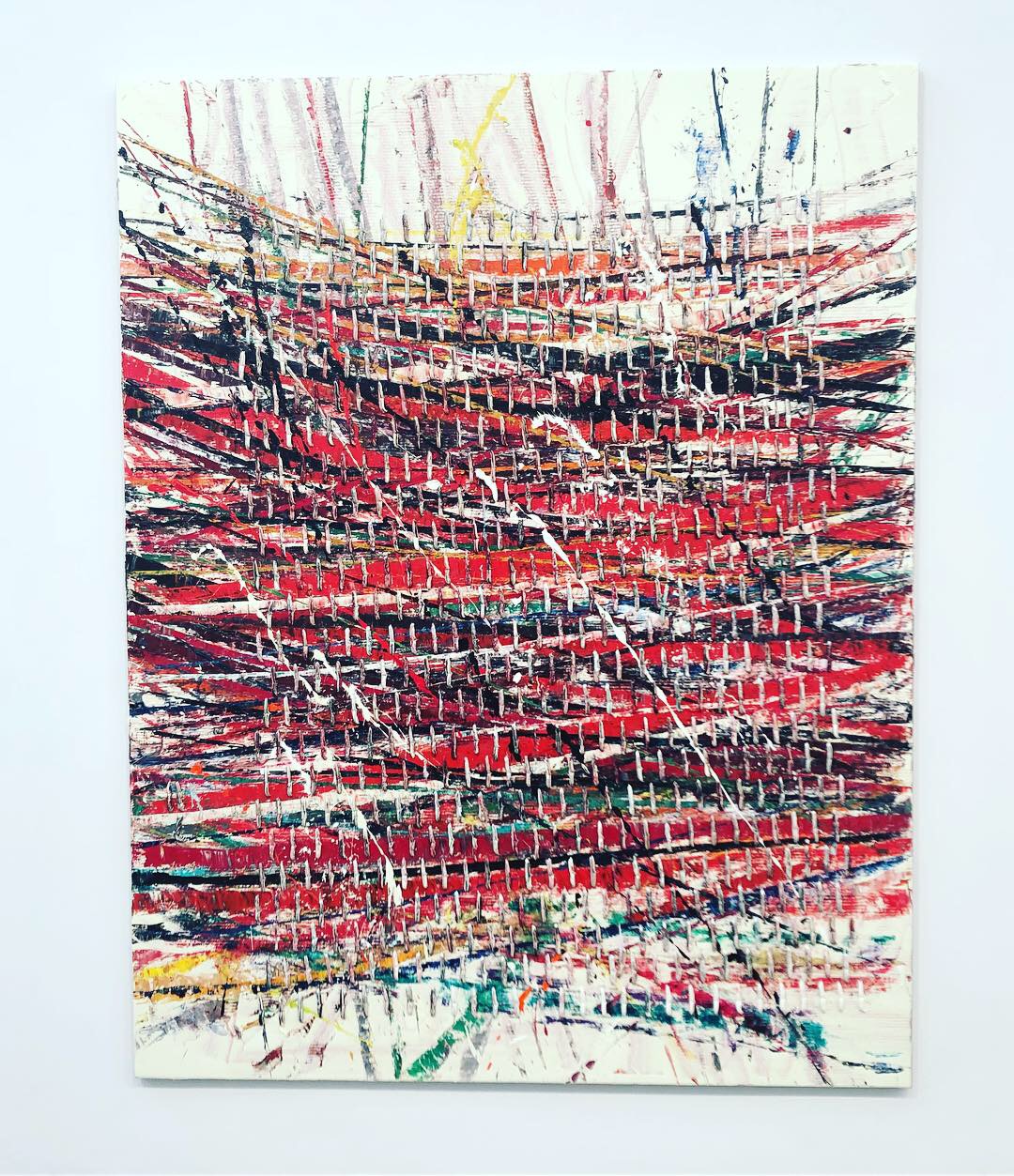 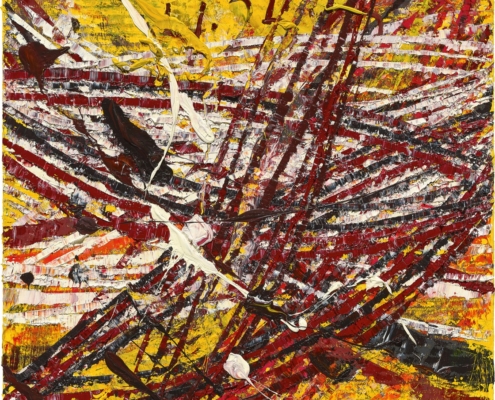 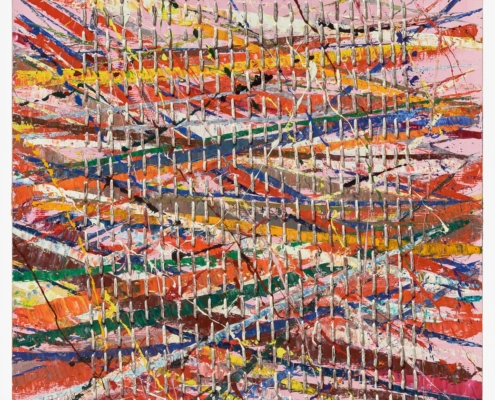 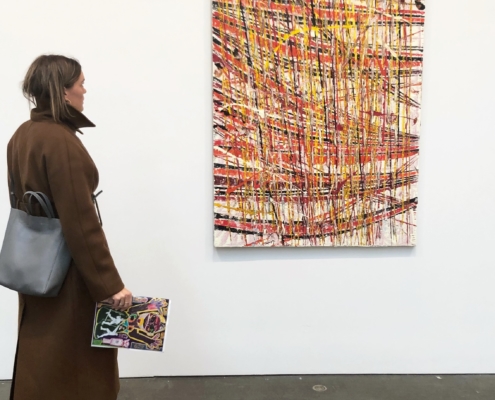 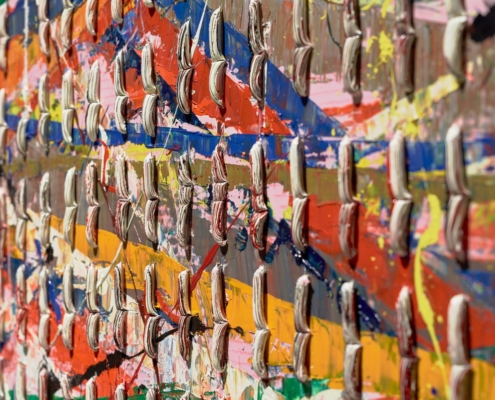 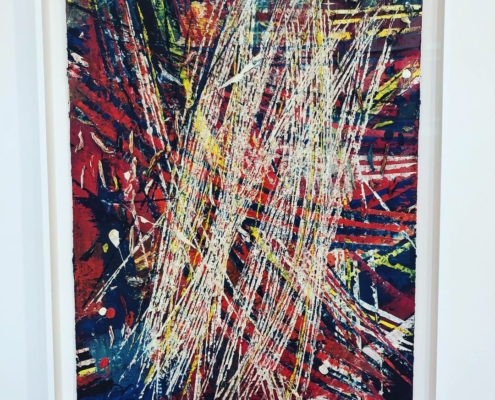 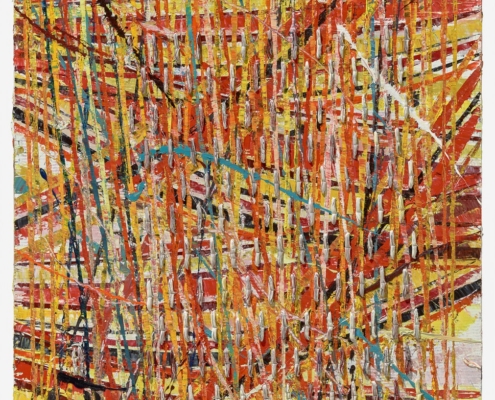