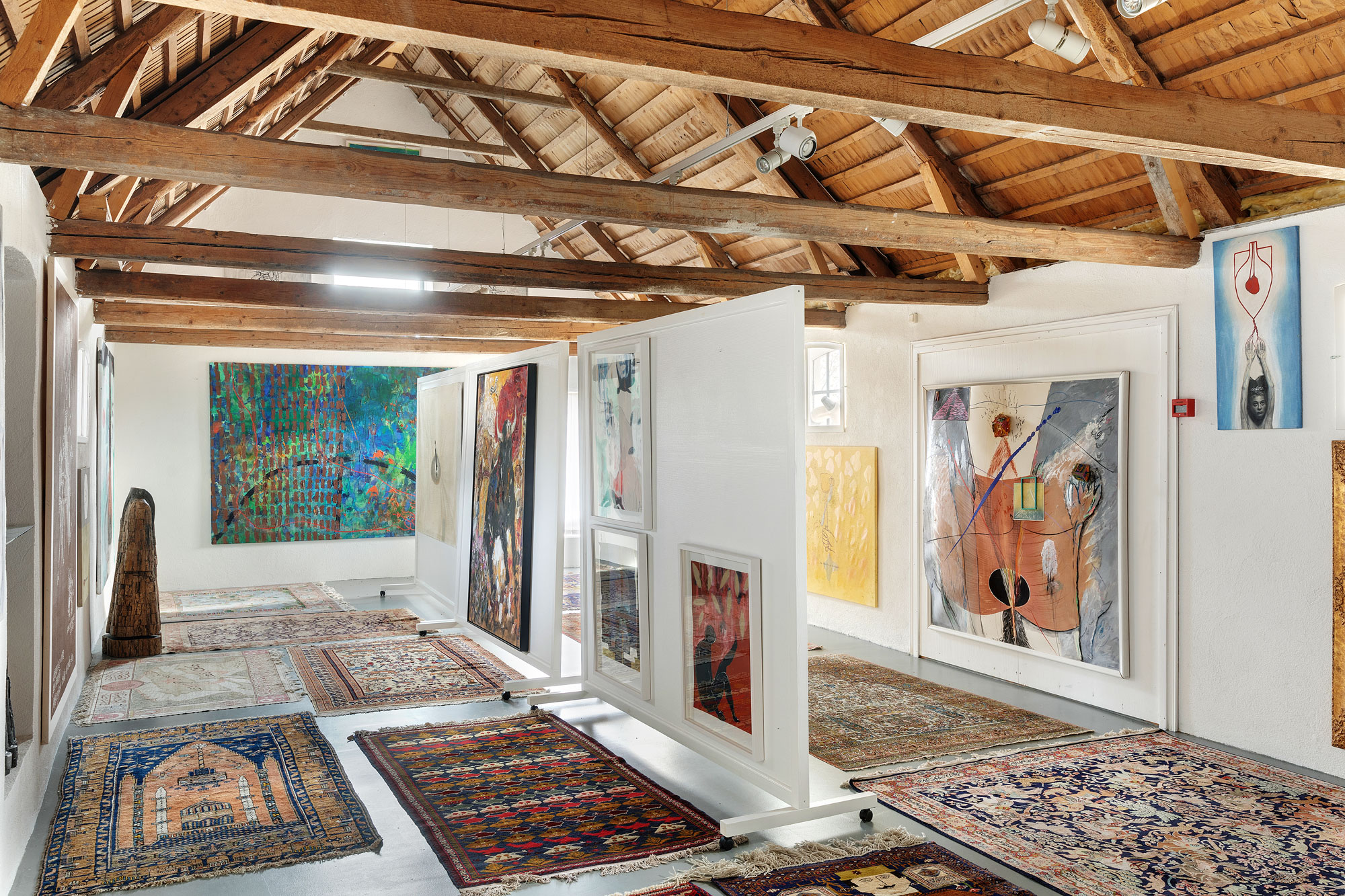 We have now lived with the Corona pandemic for too many months. It is not an understatement to say that the world has changed during this time and dramatically so. Art and the Art Market are no exceptions. Mega galleries with billion dollars of sales suddenly can not afford some of its staff after this (relatively) short “adjustment” period; ain´t much of an economy there! I get a bitter taste of that in the commercial art world  it only comes down to sell sell sell, no matter what it is – as long as it is marketable and saleable, and sometimes it even has not to be that.

OK, the commercial world out there is a tough one and Art and Art Market are, of course, a part of that, but still? So quick to adjust and follow? To me they are dealing with other “products” than nuts and bolts that also have other values than pure economical. Such values are not so easy to put simple price tags on and I don´t like the radical way this is now practically done. I also can´t see too many artists appreciating being treated as commodities exposed to the Market.

On the other hand, new artists are coming forward, maybe even breaking through in commercial terms. But watch out – in the art magazines, especially those on the net, we can now read about the artists that no longer can demand the sky high prices they achieved just some time ago (Tauba Auerbach, Lucien Smith, Anselm Reyle, just to name a few of the biggest rollercosters). In this down turn perspective the change and the downslide of prices can come quick and. normally, has no looking upwards again. The flippers are like sharks. They go from one prey to another in an ever search for the quick flip. Some larger galleries are said to be trying to stop such “artlovers” by putting them on a blacklist and not selling anything to them again. From what I can see, that strategy is not really paying off.

But I think that most artists after all try to stay away from the flippers  world. At the end they want to build a stable and respected career. In such a mood, they should also refrain from another phenomena that we also have seen for some time, the “Disneyfication” of art; simple uncomplicated repetitive works executed in likeways uncomplicated and repetitive techniques. The Japanese guys Murakami and Nara are two horrible examples in this bad category.

Today there are few artists like Clyfford Still who in the 1950´s definitely turned his back to the commercial world and refused to work with commercial galleries and also most museums (He did have his last museum show the year before he died in 1979 at the Metropolitan in New York). According to his museum in Denver, he had a unique artistic vision and was unwilling to compromise it for money or recognition. As a result of this he actually sold just a few of his works, enough to live on, and his museum now has about 94% of all his works (that is not that many, he was extremely sensitive to what he produced). His foundation was allowed to sell four paintings at Sotheby´s when his museum finally was created some 30 years after his death; generating some MUSD 110 for the museum!

So, what else has happened? From a personal point of view I think we all now got our world shaken quite a bit. Art wise? Well I don´t know. Maybe being isolated as a 70+ gave me even more time to walk around the Collection and look, observe and think. What is it in an art work that still makes me “tick” after soon 50 years of collecting? An essential and important thing is pure admiration for the craft itself, manifested in a work that appeals to me over and over again. The imagination to create and transfer an idea into a single work of art and the ability to execute and actually produce it (you know, and have heard before, that factory and assistent produced “art” is the worst thing I know and always have avoided to buy). Most projects and plans have been cancelled and postponed now during the pandemic. A good thing here seems to be that some artists take the extra time they hereby get to further think about their situation and their work, both what they are doing right now but also, more important in my opinion, what they will be doing tomorrow and thereafter. Let us hope that this will lead to new masterpieces for many artists.

Those days are not here yet. Now Kaws is pounding out his figures repetiously and more vigorously than ever, Nara´s scribbling on the walls in a sloppy downtown bar in New York´s East Side could be worth millions of dollars and poor Koons doesn´t know how many of his hundreds of staff painters he can afford to keep (poor guy). On the other hand,  established artists with world (art) reputation like Sean Scully, even though he knows his prices and travels his private jet, still is true to his art and makes new works still better and more interesting than ever. (I still have a vivid memory of when the whole family, young directors and everything, saw his show “The Catherine Paintings” at Palais des Beaux-Arts in Charleroi, Belgium, in 1995; you could really feel his strong artistic presence in this small rural museum). This is the kind of artist that I would like to have in my Collection. The same can be said about at least two other old timers; Kiefer and Baselitz (his recent show “Years later” at Gagosian Hong Kong testifies to that). You can almost smell it – these artists have not given up anything! They keep on pushing new things and better things than before and they are not afraid to try and do new things, even completely new that they never done before. That new work by Baselitz is just like that! Simply brilliant! But we still have a strong memory of “Hjältarna” (the Heroes), his solo show of older works from the mid 60`s at Moderna Museet in Stockholm 2016.

We now hear that tomorrow we will not need so much office space anymore. Of all the offices I visited over the years during my long career in business, very few of them had any art works at all. To be completely honest – they had nothing at all! An exception I remember, however, was some of the law firms in London that I visited. OK, no Bacon and Hirst (he was not even invented then). But traditional heavy English interior; OK again; one of my weaknesses is Chesterfield furniture – we bought our sofas close to 50 years ago; and not ONE button is missing. English quality maybe, I am not so sure. That is not an established and verified fact by the way. I once had a Lotus Elan (then the top of British car technique) so I know who invented darkness – Lucas (if you are a car buff, you will laugh now because you know what I am talking about). In the future there will be fewer and smaller offices so there will most likely also be fewer public art works; probably in reality again more or less none. I do hope however that they will keep the Chesterfields; I certainly will keep mine. And the Tea Ladies to go with the comfortable furniture – but I have a feeling that also they are a dying breed, the dinosaurs of the catering business.

Over the years of collecting I can notice a change in how I appreciate art and what I de facto like. Basically, I like technical skills manifested in original works of art, in best cases the kind you never seen before. Thus, in the early 90´s I was very impressed when I came across the (then) young Belgian artist Wim Delvoye. I also met him privately on several occasions and liked his serious attitude towards his work and the way he also prepared his artistic situation. He then worked in a Belgian surrealistic tradition; Magritte, Enser, Delvaux! I especially liked his etuis – for example formed as a shovel. Strange and an unusual form for such an elegant and shiny object. The idea came to its full potential when you opened the shiny etui and found … not only a shovel but an old rusty ugly one! A complete and unexpected anticlimax that fooled you and took you by surprise. Excellent work and concept! Also his concrete mixers, in full size, á la different modes of painting and carpentry are great. So unexpected also here but still very well executed, both idea and form. And the first work that we bought from him, the tattoed pig skin. In his early days we had quite a big collection of his works. But then repetition and, worse, industrial massproduction started following his increasing reputation and prices. He got more and more famous, more galleries got involved; we got off.

I have said it before – I have been very much against fabrication and industrially made works. Koons, Hirst and the like thus are artists I don´t like and I can´t see how their status, and prices, ever can be justified, or even interesting. If anything they should be risky if you are buying them on financial speculation. At a sudden change of market love, the down fall both for status and prices could be dramatic. When their creation ability goes into lowest gear, they “compensate” by doing editions and simplified variations instead so to keep up a certain amount of work on the market. I would feel very foolish to enter into that market and the mere thought of having to look every day on such a work in the Collection, and knowing that the world is more or less full of various imitations and copies would be saddening.

And talking about sad! All this “celebrity” art which you see more and more nowadays. As soon as someone gets medial attention they also seem to think that they are God´s chosen gift to the Arts and with so much personality and creativity to show to the world. So they just also have to make “art”. Hollywood star or Swedish influencer – they all think they got the greatest talent to make “art”, painting, photo or sculpture, it doesn´t matter.

Having been this negative, I must admit that there is, as always, exceptions. When it comes to fabrication and large works I find Ai Wei Wei a great exception. Just look at his large works like “Sunflower Seeds” (seeds made of porcelain that kept a whole Chinese village busy for years painting them individually; 100 milj such seeds were used for the installation at the Turbine Hall of Tate Modern in London) and “Straight” (an installation consisting of 90 tonnes of steel reinforcing rods straightened by hand after being mangled in the 2008 Sichuan quake and the consequent demolition of local schools). The sheer scale of these works are mindblowing and put in Wei Wei´s context, they make sense in a way that will occupy your thoughts for a long time after you have seen the works! You can´t ignore the importance of such heavy works!

Our own Artists are now making time available in their work to think and rethink what they are doing. And what they have been doing. They can now, more than before, relate to in general terms experiences of different kinds from their past, including a long life and the career itself. A lot of things have happened along the way; such as but not limited to mistakes, trends, practical solutions to problems and issues in their daily work. How things and ideas mature and can be handled and dealt with in the creative process.

There is still hope for the Arts also after this pandemic….