This sculpture has been away from The Olsson Art Collection for some 20 years. At that time we made a big sculpture Project with Raul Farco, our Argentinian master sculptor. The Project is seemingly based on the Jalisco Story. How in the Mexican city of Jalisco the family of a murdered man intervened where the police had failed and managed to catch the murderer. They took him by rope walking through the main street to the jail, forcing him to carry his murdered victim on his back, a rather draconian start on his punishment. That is the base story. A pretty dramatic story on how you as an individual can seek justice (and maybe also revenge) on your own, against the system.

The Project of the Jalisco Story consists of a number of sculptures of basically three sizes, as we know of, all made in Carrara white marble; one really large, three medium size (like this one) and a number of small ones. In our Collection we have the large one (230 cm), five small ones (50-60 cm) and now two medium sized (130 cm).

When you look at the various compositions of the different sculptures, the overall concept, however, is much wider. Yin and Yang, the twofold character of the Universe, is built into the sculpture. The expansive side of a person is put against the contracted side – how do you find, and maintain – the balance? The two sides shares the same body but the thus twined figure while sharing a physical body has three or four legs, perhaps indicating how stable and secured that person is or is not. There is an internal struggle going on in each sculpture. The faces have no expressions but are flat – everything is taking place inside the mind and the body and direct feelings are being hidden from view. The carrying person is trying to concentrate and get strength to carry through his gruesome task by keeping his arms and hands tightly in front of him and at the same time pressing them against his abdomen to create and gain the force and strength necessary to carry on and complete his destined walk. This effort in some sculptures is further magnified by the hands being converted to a piece of big rock in front of him instead.

When we commissioned the Project and bought the pieces, we sold two of the medium sized sculptures to help finance the Project; one to a private collection in Brussels and one, this one, to a large company in Stockholm (we knew one of the bosses). But the poor sculpture was completely alone there. The whole interior at this main office of the large company was dreadful – how anybody could do any useful thinking in there is a mystery. If they cared the slightest about their working environment to be a place to thrive in – they should be on the brink of a nervous breakdown instead; forget any useful performance there, at least by sophisticated and dedicated thinking and thriving employees! The furniture was of cheapest kind and the interior “design”; colouring, composing and decoration pieces were most likely selected by the usher services because that was the easiest and cheapest way of creating an “efficient and cheap” office environment. The lack of art on top of this turned the office into an intellectual desert!

That company, a consulting firm with several thousands of employees, is now “modernising” the head quarter premises. In other words – all old stuff is thrown out, including this sculpture which was sent to an auction firm in Stockholm and subsequently bought by us. I have no idea what the top de la créme now is putting in instead – but maybe then both I and the company can happily move on.

So, the lost son Sculpture is now with us and joining his same size brother sculpture at the opposite sides of a large room. There was no special celebration party in honor of its homecoming.The room now got symmetri in the sense that there now are two sculptures of the same kind standing on each of the two short sides of the room and both facing the centre of the room. This is a room where I can spend my time and even work – although I rather sit there soul searching and sipping on something from the cellar. 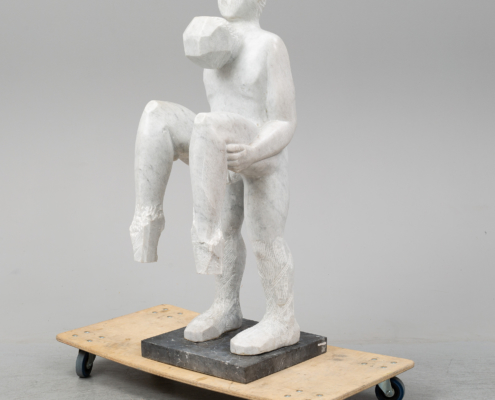 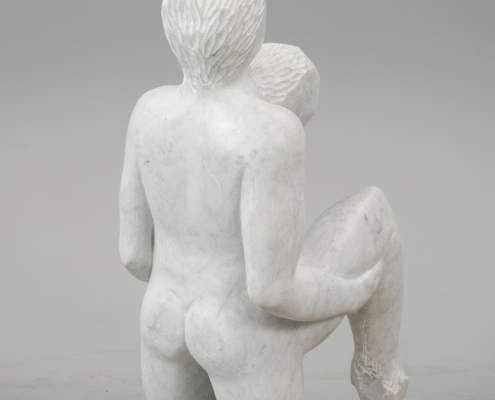 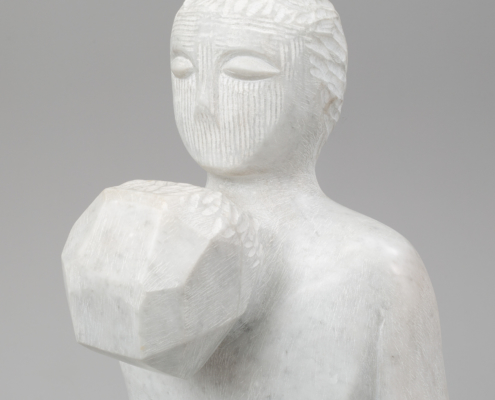